Another 1.2 Million Workers to be Eligible for Overtime Pay Under New Dept. of Labor Rules

After five years of debate and litigation, the United States Department of Labor has finally announced its new overtime rules, and an estimated 1.2-million workers are expected to become eligible for overtime pay who do not qualify under present rules.

The new overtime exemption rule published on September 24 sets a new annual salary threshold that workers need to exceed in order to qualify for the Fair Labor Standards Act’s “white collar” overtime exemptions, at just over $35,000.00. 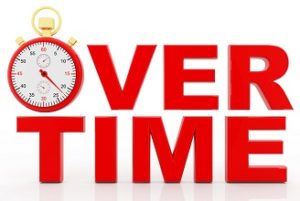 “For the first time in over 15 years, America’s workers will have an update to overtime regulations that will put overtime pay into the pockets of more than a million working Americans,” Acting U.S. Secretary of Labor Patrick Pizzella said. “This rule brings a commonsense approach that offers consistency and certainty for employers as well as clarity and prosperity for American workers.”

In the new rule, the Department of Labor is:

Current federal law requires workers to receive time-and-a-half pay for hours worked over 40 in any week – unless they receive a salary of more than $455.00 a week and have executive, administrative, professional, or outside sales duties.

Doctors, lawyers, and top executives are overtime-exempt. But so too are shift managers at hotels and restaurants, nonprofit staff, teachers, and a host of other lower-paid workers on a salary. For example, a fast-food worker earning minimum wage would receive overtime pay at 1.5-times his regular hourly rate for all hours worked in excess of 40 in a week. But his or her shift manager, making a salary of $30,000.00 a year, could be required to work 50, 60, or 70 hours a week, or more, with no additional compensation.

Under a previous proposal by President Barack Obama, the threshold would have been raised it to about $47,476.00 a year, which would have benefited an estimated 3-million more workers by entitling them to either a shorter workweek or more pay. However, the Trump Administration kept those changes from taking effect.

The new income threshold does not change the substantive job requirements to qualify for the “white collar” overtime exemptions. To be exempt from receiving overtime pay the employee’s job duties must still primarily involve executive, administrative, or professional duties as defined by federal regulations.

The Department of Labor estimates that in 2020, 1.2 million currently exempt employees who earn at least $455.000 per week, but less than the new standard salary level of $684.00 per week, will, without some intervening action by their employers, gain overtime eligibility. The Department also estimates that an additional 2.2 million white collar workers who are currently nonexempt because they do not satisfy the duties tests and currently earn at least $455.00 per week, but less than $684.00 per week, will have their overtime-eligible status strengthened in 2020 because these employees will now fail both the salary level and duties tests.

The Depression-era Fair Labor Standards Act of 1938 (“FLSA”), which established a federal minimum wage – now $7.25 per hour — and overtime benefits for the first time, was meant to end sweatshop-style conditions in U.S. factories and lift millions of Americans out of poverty. The overtime benefit, in particular, was supposed to discourage employers from overworking their employees, by making it cheaper to hire an extra worker than to require one employee to work 80 hours in a week. But the problem with the FLSA is that benefits aren’t indexed to the changes in cost of living.

The Labor Department says the new rule will transfer about $400-million from private U.S. employers as compensation to their workers each year for the next 10 years. That should have a minimal impact on businesses, as the $1.5 trillion tax cut that Congress gave them in 2017 is expected to cover it.

The text of the new rule and an explanatory memorandum totaling 245 pages is available online at: https://www.dol.gov/whd/overtime2019/overtime_FR.pdf