Various attorneys at DLD Lawyers were in attendance at the Florida Association for Women Lawyers – Miami Dade Chapter, 33rd Annual Judicial Reception held at the Four Seasons Hotel on Wednesday, December 2, 2015. DLD Lawyers is proud to be a Grand Benefactor for this event and to support the FAWL Miami-Dade Chapter. 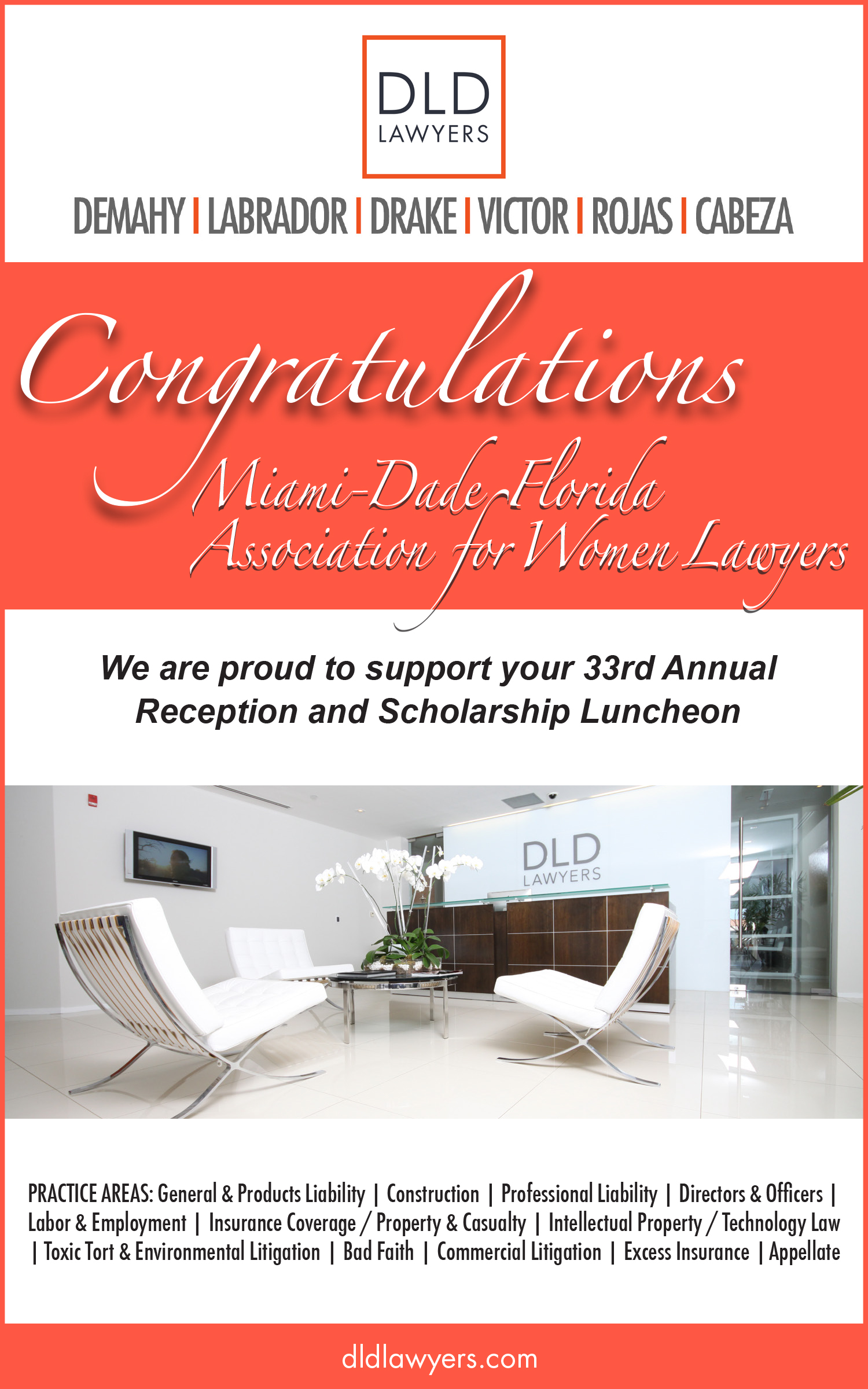 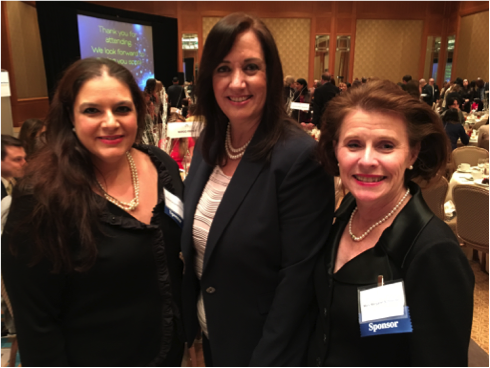 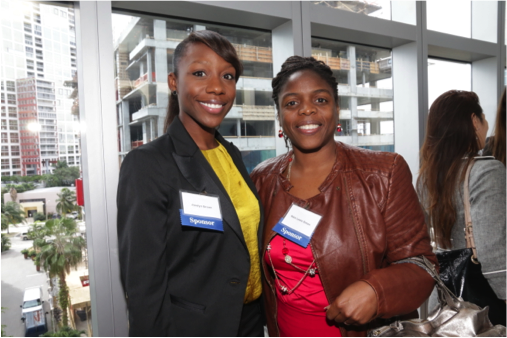 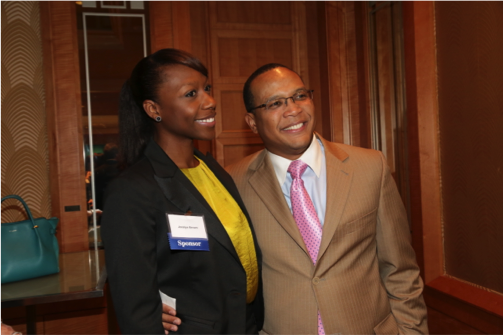 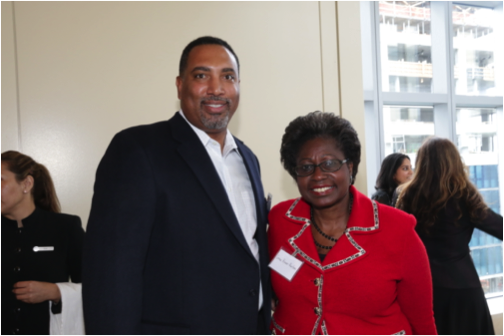 Bill McCue, working with counsel for co-defendants, recently defeated a multi-million dollar claim at trial involving a motorcyclist who crashed into a utility box in the median area controlled by the Florida Department of Traffic and owned and maintained by the Florida Keys Aqueduct Authority. The plaintiff, who suffered permanent brain injuries, alleged that the utility box was improperly raised off the ground and sought recovery from several parties, including the contractor that built the utility box, the company that inspected it and our client, TSI, which was responsible for maintaining the median and the area surrounding the utility box. Plaintiff sought over $14 million from all defendants, and after a four-week trial and only 30 minutes of deliberation, the jury returned a defense verdict.

Michael Crist was featured as a panel expert in asbestos claims and litigation management published in Corporate Disputes Magazine. The panel discussed the effect of recent cases, trends, and verdicts on the management and defense of asbestos claims. They discussed novel issues in asbestos causation, the bare metal defense, the “each and every exposure doctrine,” and pitfalls for new defendants.

Michael Crist, a litigation partner with DLD Lawyers, will speak at the American Conference Institute’s 20th National Advanced Forum on Asbestos Claims and Litigation in Philadelphia on January 14-15, 2016. A nationwide array of judges, experts, corporate representatives, and counsel will discuss cutting edge issues in asbestos litigation. Michael Crist will provide a nationwide analysis of the diverse legal positions advanced in take-home exposure cases where Plaintiffs allege injuries from products that they never worked with or around. While the specter of liability for a limitless class of persons exposed through mere contact with another person’s clothing has caused some jurisdictions to bar such claims, others have permitted, or even encouraged, them. Such cases are the next wave of asbestos litigation that has already driven over 100 companies into bankruptcy. Analyzing such cases, anticipating future directions and developments, and preparing for such issues can help the ever expanding population of new defendants to navigate such treacherous waters.

DLD Lawyers is pleased to welcome Daniela Abratt to the firm.

Ms. Abratt is a recent Florida International University College of Law graduate, cum laude. During law school, she worked as a law clerk for Justice Charles T. Canady at the Florida Supreme Court and Judge Richard J. Suarez at the Florida Third District Court of Appeal. As an active moot court member, she argued as a finalist in the Price International Media Law Moot Court Competition regional rounds in New York City and subsequently placed third in the international rounds at the University of Oxford in Oxford, United Kingdom. She also worked as a Certified Legal Intern in the FIU Immigrant Children’s Justice Clinic, representing abused, abandoned, and neglected minors in dependency proceedings.

Ms. Abratt served as a Comments Editor for the FIU Law Review and earned three Book Awards, two for legal writing courses and one for a seminar on Intellectual Property and Human Rights. She was also awarded the Dean’s Scholarship, Judge Aaron B. Cohen Externship Scholarship, and a full tuition scholarship from the Betty G. Reader Foundation for her academic standing and community service.

We are proud to announce that partner Donell A. Hicks was recently elected the chair of the Real Estate and Probate Law Section for the National Bar Association. Donell is board certified in construction law and handles numerous complex litigation matters. We are pleased to recognize his leadership, skills, and work ethic.

DLD Lawyers is excited to welcome José I. Rojas to the team. Mr. Rojas is AV-rated and possesses over 30 years of experience in complex civil litigation and intellectual property. He concentrates his practice in resolving or trying non-medical professional liability cases, complex insurance and business lawsuits, international commercial disputes, and intellectual property and technology-related claims. Mr. Rojas has served as outside “risk management” counsel to several clients in South Florida and has substantial “in-the-trenches” experience trying complex cases before juries, arbitrators, and state and federal judges.

DLD Lawyers is pleased to announce that Tiya S. Rolle has joined our firm.

Michael Crist, a litigation partner with DLD Lawyers, will be presenting a Perrin Conferences Webinar on formaldehyde litigation, entitled, Formaldehyde – The Next Asbestos? Co-presenters include Brent Kerger (board certified toxicologist) and Patrick Sheehan (ecologist, toxicologist, and risk assessor) of Exponent. Together the presenters will outline new developments in formaldehyde litigation, regulation, exposure assessment, and toxicology. While the public commonly associates formaldehyde with museums and FEMA trailers, it is actually ubiquitous and has been described as the smell in new cars, homes, and furniture. With the public’s attention now turned to the off-gasing of Lumber Liquidators products and nail cosmetics, the scope of litigation is expected to grow dramatically. This post will be updated with links to the program once it is set for early September.

Michael Crist, a litigation partner with DLD Lawyers, successfully argued a take-home asbestos case before the Georgia Court of Appeals. In an issue of first impression in Georgia, a mesothelioma Plaintiff sued both the manufacturer and distributor of a product that she had never worked with or around, but from which she claimed exposure through the work of her father. After conducting an extensive analysis of scientific, regulatory, and historical factors relevant to the state of the art and knowledge of the respective defendants, the Court concluded that there was no evidence that the distributor, as opposed to the manufacturer, knew, or should have known, of the potential dangers of asbestos to take-home plaintiffs during the relevant time frame. As such, it affirmed the motion for summary judgment provided to the distributor, represented by DLD, but overturned the one provided to the manufacturer. In so holding, the Appellate Court ruled that the Georgia Supreme Court case of CSX v Williams, 608 S.E. 2d 208 (Ga. 2005) did not apply to design defect cases. The reported decision is Fletcher v Water Applications Distribution Group, Inc, et al, A15A0527, July 16, 2015.

Michael Crist, a litigation partner with DLD Lawyers, spoke at the American Conference Institutes 19th National Advanced Forum on Asbestos Claims and Litigation which was held on June 23 and 24, 2015 in Chicago. A nationwide array of judges, experts, corporate representatives, and trial counsel discussed a wide variety of cutting edge issues in asbestos litigation. Michael Crist again provided a nationwide analysis of the diverse analytical frameworks found in take-home exposure cases where Plaintiffs seek compensation for injuries allegedly caused by asbestos transported on the clothing of others. While the specter of limitless liability for an undetermined class of persons exposed through contact with a workers’ clothing has caused some jurisdictions to bar such claims, other have permitted, and even encouraged, them. Such cases are the next wave of asbestos litigation that had already driven over 100 companies into bankruptcy. Managing current caseloads, predicting trends, and trying cases can assist the modern defendant in navigating such treacherous waters.

Angel Castillo, Jr., labor and employment partner with DLD Lawyers, was recently published with the Dade County Bar Association in the June 2015 edition of the DCBA Bulletin. The June 2015 DCBA Bulletin can be found in print in the May 29, 2015 issue of the Daily Business Review or online at the Dade County Bar Association’s website. Angel’s article, titled “Employee Handbooks Can Constitute Unfair Labor Practices,” can be found on page 3 of the Bulletin.

DLD Lawyers will be attending this year’s Miami Corporate Run in Bayfront Park, Miami, Florida. The race is scheduled to begin promptly at 6:45 PM.

Courtney Walter of DLD Lawyers’ Coral Gables office recently wrote a piece on “The Young Litigator’s Approach to Legal Writing” for the American Bar Association, Woman Advocate section. In the article, Courtney takes a pragmatic approach in explaining the importance of and how to develop strong legal writing skills in the first years of practice.

We are please to announce the South Florida Legal Guide (SFLG) has named James Shaw as one of South Florida’s top up and coming attorneys. SFLG makes its selection based on peer nominations, including many of the top lawyers in South Florida, as well as nominees’ accolades and accomplishments.

DLD Lawyers is sponsoring the American Conference Institute’s 18th National Advanced Forum on Asbestos Claims & Litigation to be held on January 15 and 16, 2015. Speakers include a nationwide array of judges, experts, corporate representatives, and trial counsel who cover a wide variety of cutting edge issues in asbestos litigation. Michael Crist of DLD Lawyers is speaking about the diversity of opinions and analytical frameworks found in take-home exposure cases in which the Plaintiffs seek compensation for injuries allegedly caused by asbestos transported on the clothing of others. While the specter of limitless liability for an undetermined class of persons exposed through contact with workers’ clothing has caused a number of jurisdictions to bar such claims, other have permitted, and even encouraged, such cases. An analysis of the nationwide methodology of such cases can assist the Defendant in navigating such issues in a variety of jurisdictions.