Jose I. Rojas selected for inclusion in the The Best Lawyers in America®

Jose I. Rojas, Partner at DeMahy Labrador Drake Victor Rojas Cabeza (DLD Lawyers), has been selected again by his peers for inclusion in the 24th Edition of The Best Lawyers in America® for his work in Information Technology Law and Technology Law. Best lawyers in America® notes that it is the oldest and most respected peer-review publication in the legal profession and that a listing in this publication signals not only legal expertise, but also ethics and professionalism of the highest caliber.

DLD Lawyers partner, James Shaw, recently published an article exploring the intersection of technology and the law. His article looks at advancements in technology in the burgeoning e-cigarette industry, elaborating on the risks involved with the use of lithium-ion batteries, which has led to a new area of litigation.

Jose I. Rojas to serve on panel addressing “One Cuba Libre, Please: Havana Club, Bacardi and the Cuban IP Conundrum” at the ABA International Law Section’s 2017 Fall Conference in Miami

Jose I. Rojas, a partner at DeMahy Labrador Drake Victor Rojas (DLD Lawyers) in Miami, will speak on the recently reignited Havana Club rum litigation, a case study in the opportunities and challenges of intellectual property litigation related to Cuba. The panel will focus on both the U.S. and Cuban intellectual property regimes, the international players involved and the role of the embargo in the US-Cuba commercial litigation.

The firm obtained a significant appellate victory last week in Florida’s Third District Court of Appeal. That court, by unanimous decision, affirmed the dismissal with prejudice of a legal malpractice case after only one amendment had been allowed by the trial court. The defense relied primarily on the judgmental immunity defense and lack of proximate cause.

DeMahy Labrador Drake Victor Rojas & Cabeza partners, Jose I. Rojas and Angel Castillo, Jr. and Associate, Alexander F. Rojas, handled the successful defense of the appeal. The suit had sought seven-figure damages against a prominent local attorney and sought to make the attorney a “guarantor of results” in the underlying LLC member dispute litigation.

Mary Margaret Schneider was presented with the “Friend of the Florida Association for Women Lawyers Award” on behalf of DLD Lawyers at its 37th Annual Installation and Awards Dinner –“Night in Paris” held June 8, 2017 in which DLD Lawyers served as Grand Benefactor Sponsor. 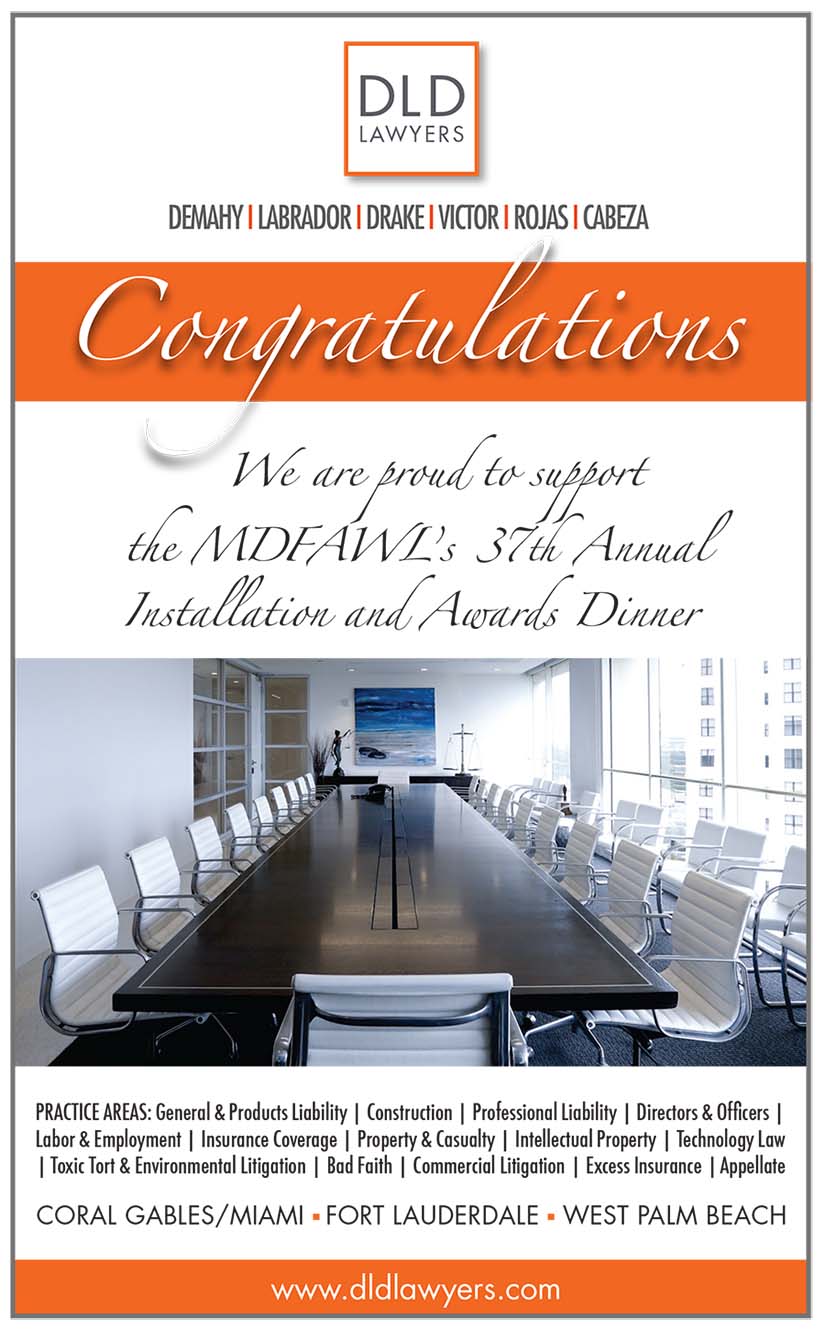 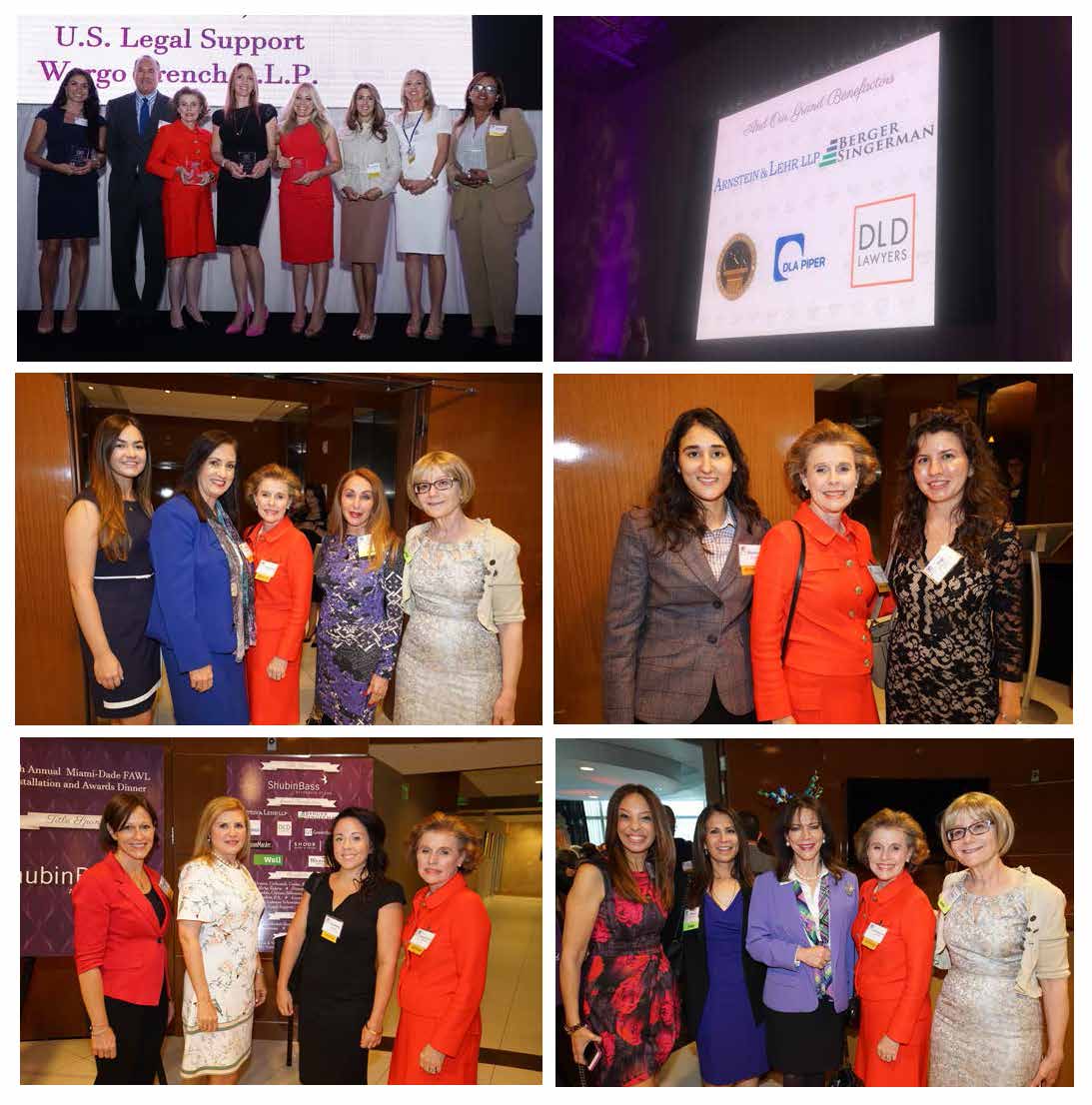 On May 12, 2017, Jose Rojas, partner at DLD Lawyers, presented a talk entitled “Feds to the Rescue: The Defend Trade Secrets Act” at the DRI Intellectual Property Litigation Seminar in Chicago. Rojas said, “The DTSA significantly changes the landscape of trade secret litigation in the United States by creating a federal civil cause of action and providing for ex parte seizures in exceptional cases.” Rojas has focused a significant part of his practice on intellectual property issues all his career and served two terms as Chair of the Florida Bar’s Computer Law Committee.

DLD Lawyers participated in the Fore the Love of Education Golf & Tennis Tournament on Friday, April 28, 2017 at the prestigious Diplomat Golf & Tennis Club. The event raised $120,000.00 for student scholarships. It was a beautiful day filled with great competition, excellent food, and more importantly, a wonderful group of people. 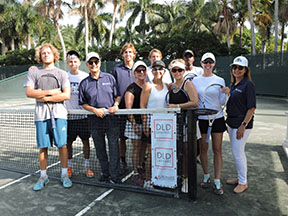 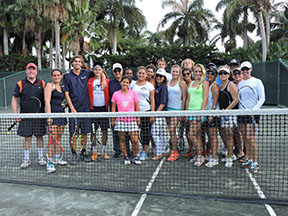 DLD Lawyers Partner Jose Rojas recently authored a paper for publication by DRI on the Defend Trade Secrets Act of 2016, which significantly changes the landscape of trade secret litigation in the United States. On May 12, 2017, at the DRI Intellectual Property Litigation Conference taking place in Chicago, Mr. Rojas will deliver a presentation outlining the topics covered in the paper, including how the law created a federal civil cause of action for misappropriation of trade secrets involving or impacting interstate commerce.

Pete L. DeMahy and James M. Shaw, both partners at DLD Lawyers, won a defense verdict from a West Palm Beach jury after a three-day trial in a case alleging auditor malpractice. The win was reported by DRI in the And the Defense Wins feature of its monthly newsletter, The Voice.

James M. Shaw, a partner at DLD Lawyers, won directed verdict from a West Palm Beach judge after close of plaintiffs’ case. This legal malpractice suit was brought by former clients of a law firm defendant who were seeking to recover $400,000 in damages for an alleged wrongful commercial foreclosure. The win was reported by DRI in the And the Defense Wins feature of its monthly newsletter, The Voice.

“Mass Tort Mania – The Effect of Saturation Advertising on Claims, Courts, and Memories” by Michael Crist

In the April 2017 Issue of DRI’s For the Defense Magazine, Michael Crist was the author of the featured article, entitled “Mass Tort Mania – The Effect of Saturation Advertising on Claims, Courts, and Memories.” The article analyzes the pernicious use of saturation advertising as a tool that molds the perception, recall, and cognition of the jury consistent with the goals of the Plaintiff’s Reptile Theory. To neutralize the playing field, defense counsel must counter its effects with specific cross examination, market research, development of cognition experts, and a pinpoint motion practice.

Michael Crist, a partner at DLD Lawyers, has been selected to moderate a panel of experienced jurists at the first ACI Toxic Tort and Environmental Litigation Conference from June 21 to 23, 2017 in Chicago, Illinois. Judges Richard Aulisi, Mark Davidson, Janis Graham Jack, Sean McPartland, and Clare Elizabeth McWilliams oversee substantial dockets of mass tort cases in New York, Illinois, Iowa, and Texas, and will provide their thoughts, reflections, and predictions regarding the past, present, and future of toxic tort litigation.

Michael Crist was recognized by DRI’s The Voice for having won a motion for summary judgment in Virginia. The defense in this product liability case involved a panoply of attacks upon the Plaintiff’s allegations of product use, but also incorporated a complicated legal analysis of the implications of over a 100 years of corporate sales, transactions, and mergers of multiple entities. Trial graphics traced the lineage of each corporation and the legal effect of each transaction upon the potential successor liabilities of the named defendants. Through graphical representations, the complex was made simple, and the disputed made irrefutable.