In 2019, the percent of wage and salary workers who were members of unions in the United States was 10.3 percent—almost half the 20.3 percent rate in 1983—the Bureau of Labor Statistics reports. 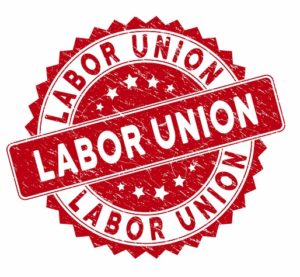 Over half of the unionized workers were concentrated in just seven states, even though those states only accounted for a third of the workforce. Those states are California with 2.5 million unionized workers, New York with 1.7 million, Illinois with 0.8 million, Pennsylvania with 0.7 million, and New Jersey, Ohio, and Washington, each with 0.6 million.

In 1983, the first year for which comparable union data are available, the national union membership rate was 20.1 percent, and there were 17.7 million union workers in the United States.

Highlights from the Bureau’s 2019 Data

Kate Bronfenbrenner, director of labor education research at Cornell University in Ithaca, New York, blamed the decline in union membership on the “anti-labor policies” of the Trump administration.

“The decline in union density is not surprising. Despite the talk of a boom economy, the climate for organizing has become much more hostile in the last year under the openly anti-union Trump NLRB (National Labor Relations Board),” she said. Declines in unionization, she added, were concentrated among white private sector workers.

Perhaps paradoxically, polling by Gallup last year found that union favorability had hit a 16-year high, after dipping significantly around the time of the 2008 Recession. Of those polled, 64% said they approved of unions ― the highest rate since 2003, and among the highest in the past 50 years.